X-MAT Aims To Produce New Value From An Old Commodity

BLUEFIELD — One company with operations in West Virginia and Florida seeks to make high-tech use of the Mountain State’s most iconic resource and establish new manufacturing jobs in the process.

Dynamic Material Systems, led by husband and wife Bill and Sue Easter, is located in Florida but does business in West Virginia as X-MAT. It’s a composite company that found the Mountain State’s coal to be the missing ingredient for polymer ceramics. 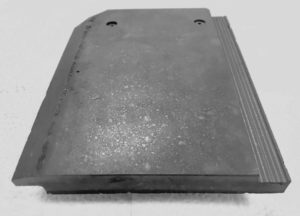 A coal infused roof tile is lighter and stronger than tiles made of metal or other ceramics.

“These polymer-forming ceramics have been around for 40 years, and what we’ve done is move them into bulk sizes and shapes,” Bill Easter explained. “They’re usually used as coatings and fibers, very small-scale kinds of parts. We started a lab about six years ago, and we had a problem where we needed a carbon source, so we tried coal as our carbon source, mixing it with our material, and we got fantastic results. That’s how it all started.”

He added that the process sequesters the carbon, meaning it releases no greenhouse gases, and the coal does not burn because of the relatively lower temperatures used.

“There’s lots of coal, and we need all kinds of ways to use it to turn it into products,” Easter said.

Easter said X-MAT is also exploring the use of coal in lithium battery anode materials because coal has better energy properties than what is currently used in this application.

“Right now, they use graphite in your cellphone,” he explained. “If you drive a hybrid vehicle or use a calculator, your lithium battery would use graphite as the anode material, and now we’re looking to using coal-based anodes. Coal has this reputation as being dirty, but it could be part of the renewables because batteries are the key. That’s the missing piece.”

X-MAT wants to locate a manufacturing center for its products in Bluefield in order to be close to a supply of coal and Bluefield State College’s knowledgeable staff.

Easter said that while the company’s research lab is in Florida, X-MAT seeks to set up a manufacturing center in

Mercer County’s Bluefield. That, he said, is in order to be close to needed coal supplies.

Because of Bluefield’s long history of industry and railroads in support of coal, it was the perfect choice.

Having lived in West Virginia for a time, Easter said the biggest difference between Texas and the Mountain State is that the former turns its oil into chemicals and other products before shipping it out. He wants X-MAT to be part of a value-added chain that manufactures a product while benefiting surrounding communities in West Virginia.

Easter said another critical component of this work with coal is Bruce Mutter, an engineering professor at Bluefield State College and leader of the Center for Applied Research & Technology.

“He’s helping us take it from the R&D stage and turn in production, and he’s fantastic,” Easter said, adding that Mutter made the location in Bluefield possible by knowing the area and local rules and regulations. “He cares deeply about his community, and he really wants to bring business to his area.”

Also moving X-MAT’s work forward is a Small Business Innovation Research (SBIR) grant that encourages smaller businesses to engage in research that can be useful for government agencies but also has potential for commercialization.

Easter said he received a Phase I grant from the National Energy Technology Laboratory in Morgantown. A Phase I grant seeks to establish merit and commercial viability. Easter said he’s now aiming to acquire Phase II funding, which will continue to pay for research and development.

Barth said this is possible through support from the U.S. Economic Development Administration and the Claude Worthington Benedum Foundation.

“It was exciting to learn about them, not only because their product uses coal in a new way but also because they are familiar with and successful with the SBIR program,” Barth said. “We see this as an emerging advanced material that could be manufactured in West Virginia, and we see that as a positive sign.”

Between X-MAT and Touchstone Laboratories in Ohio County, Barth said West Virginia is seeing multiple examples of how coal can be used beyond power generation.

She also commended X-MAT’s decision to pursue a value-added business model, which represents a reversal of past trends when the raw material was extracted and shipped elsewhere.